In autumn 2017 we carried out a public consultation on our proposals to transform roads in Southwark as part of Cycle Superhighway 4 (CS4). The route is an important part of the Mayor’s Healthy Streets Approach, which aims to make London greener, healthier and more pleasant through prioritising walking, cycling and the use of public transport.

We received over 3,200 direct responses and a further 1,400 campaign responses to the CS4 consultation. The feedback we received has helped us to improve the scheme’s design, and we currently intend to proceed with the scheme with minor modifications. A copy of the Consultation Report and our Response to the Issues Raised is available, including details of the changes we have made at tfl.gov.uk/cs4.

We would like to hear your views on these further proposals.

What we are proposing

Our revised proposals would improve pedestrian facilities and address safety and congestion concerns at the junction.

Predicted impacts of our proposals

The traffic modelling that we previously undertook for the CS4 proposals showed that strategic traffic from the A2 heading for Rotherhithe Tunnel may prefer to use Southwark Park Road as a result of the proposed changes along the A200. It also suggested that journey times for the P12 bus route in the evening peak may experience an increase of up to 6 minutes from Southwark Park Road to Lower Road.

Reducing traffic volumes on Southwark Park Road would reduce congestion at peak periods, make it easier for pedestrians to cross the road and improve conditions for people who want to cycle. It would also ease the eastbound flow along Jamaica Road towards Rotherhithe Tunnel by reducing the number of vehicles joining from Southwark Park Road.

The changes would mean there would be less demand at the junction and allow us permit the ahead movement for all traffic from West Lane to improve local access. 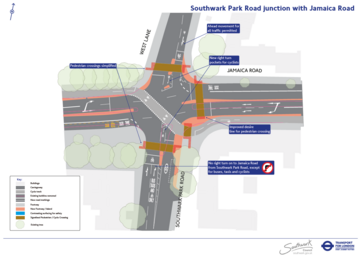